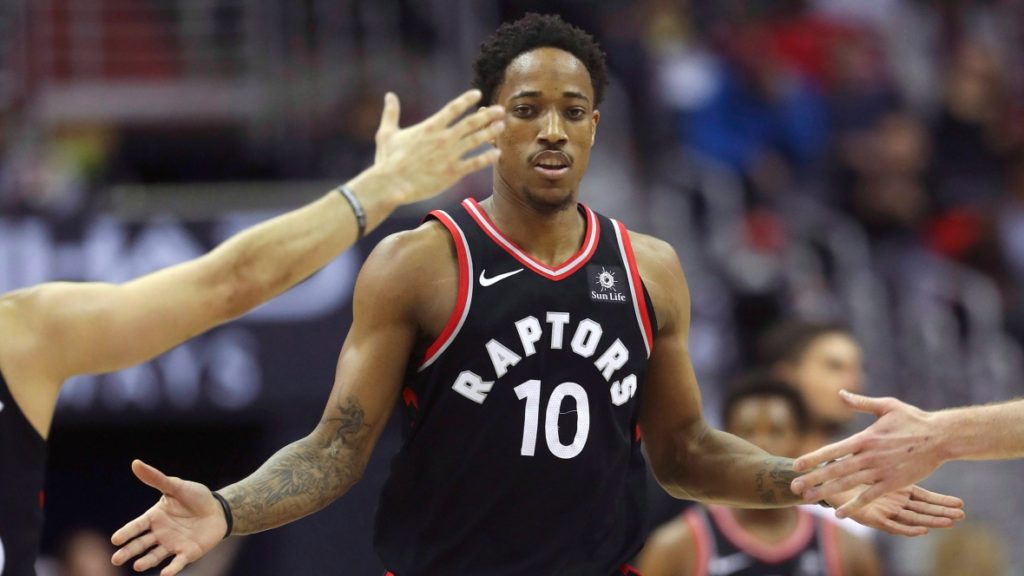 Since the Raptors Demar DeRozan broke his silence a few weeks ago about his struggles with depression, he’s been overwhelmed with the response he’s getting from fans.

DeRozan first went public about dealing with depression on Twitter in mid-February and he’s been hearing from people ever since.

His message resonated with a group of young fans who wanted to show DeRozan their solidarity but the support Torontonians have been showing the Compton, Calif. native has been nearly a decade in the making.

“Don’t worry, I got us,” is what a then 20-year-old DeRozan tweeted the summer Chris Bosh left the Raptors to play for the Miami Heat.

Bosh spent seven seasons with the team but ultimately chose to take his talents to South Beach.

In the wake of his departure, DeRozan’s words comforted many abandoned Toronto fans spurned by another star player who wanted to leave town like Vince Carter did in 2004.

Since then, DeRozan has led the Raptors to five straight playoff appearances and broken several franchise records along the way to becoming a four-time NBA All-Star.

Despite his performance on the court, it was a tweet DeRozan posted off of it that caught fans and players by surprise.

In the middle of the night in February on the eve of NBA all-star weekend last month in Los Angeles, DeRozan revealed a rare glimpse into his struggle with mental health by tweeting, “This depression get the best of me.”

After opening up about his battle with depression, a group of fans including Syed Hasny, Judith Wang and Aleks Sanjevic began to rally behind the Raptors star online.

The three fans helped in organizing Project Don’t Worry We Got You, a GoFundMe campaign that originated on the Raptors subreddit forum as a way to support DeRozan.

“We originally just wanted to put a book together full of tweets and letters from fans showing their appreciation for DeMar and it ended up becoming something a lot bigger than that,” said Hasny, a psychology student at McMaster University.

The initial goal was $80, Hasny told CBC Toronto. But the campaign quickly surpassed that amount in the first six hours it was posted online.

To date, the project has raised more than $1700 in a little over a week.

“The response has been overwhelming. We’ve had a lot of submissions and letters from fans who are now opening up about their mental health issues as well and it’s been really touching to read them,” said Wang.

While the campaign has more than met its goal, Hasny said the additional funds will be going toward Lupus Canada.

“It seems like DeMar’s been going through a lot in his personal life lately with his father being sick and his mother battling Lupus, so we kind of decided through a vote that we wanted to give back to a good cause in a bigger way,”he said.

Wang, a 19-year-old student at Ryerson University said DeRozan opening up about his mental health struck a chord with her after seeing friends and family battle with illness.

“I’ve seen the extreme side of mental health and how detrimental it can be by leaving it unspoken about, so seeing someone like DeMar speak out on it means a lot. He’s really helped a lot of people,” she said.

Monique Lawrence, 28, battles her own health issues but says DeRozan’s comments have helped her.

“Growing up I’ve always been a quiet person, and even with my struggles of living with cerebral palsy, which is very difficult, seeing how hard DeMar works everyday motivates me,” she said.

Lawrence said that although she’s felt down on herself before, knowing DeRozan battles with the same thing has inspired her. “I want people to understand that my disability won’t stop me. We all go through things, but watching DeMar talk about depression makes me just want to open up and do more,” said Lawrence.Aleks Sanjevic, 17, a high school senior from Brampton, said DeRozan voicing his struggles with depression is an important moment in sports.”People see these athletes and think they have all this money. Money doesn’t really solve your depression but sometimes talking about it does, and DeMar is leading the conversation for athletes.”

Since DeRozan first revealed his struggles with depression other NBA players such as Kevin Love of the Cleveland Cavaliers and Kelly Oubre of the Washington Wizards have credited the Raptors guard with helping them speak out about their mental health as well. In a post-game interview last week, DeRozan told reporters he’s been overwhelmed by the support from fans and players in the NBA who’ve reached out to him. “The response and everything I’ve got back from it was so positive… it made me feel, you know, pretty damn good, honestly,” DeRozan said.Project Don’t Worry We Got You will continue to accept submissions of artwork, photos and messages of support until March 23.The plan is to deliver the book to DeRozan before the NBA playoffs start in the spring. Amidst all the support DeRozan has been flooded with, the group said they just wanted to thank DeRozan for everything he’s done. “DeMar has done a lot for this city and for sports and we just want to thank him for helping take the stigma of mental health away,” said Wang. “People care and he should know that.”

One thought on “Raptors fans rally to support NBA All-Star DeMar DeRozan in battle over depression.”