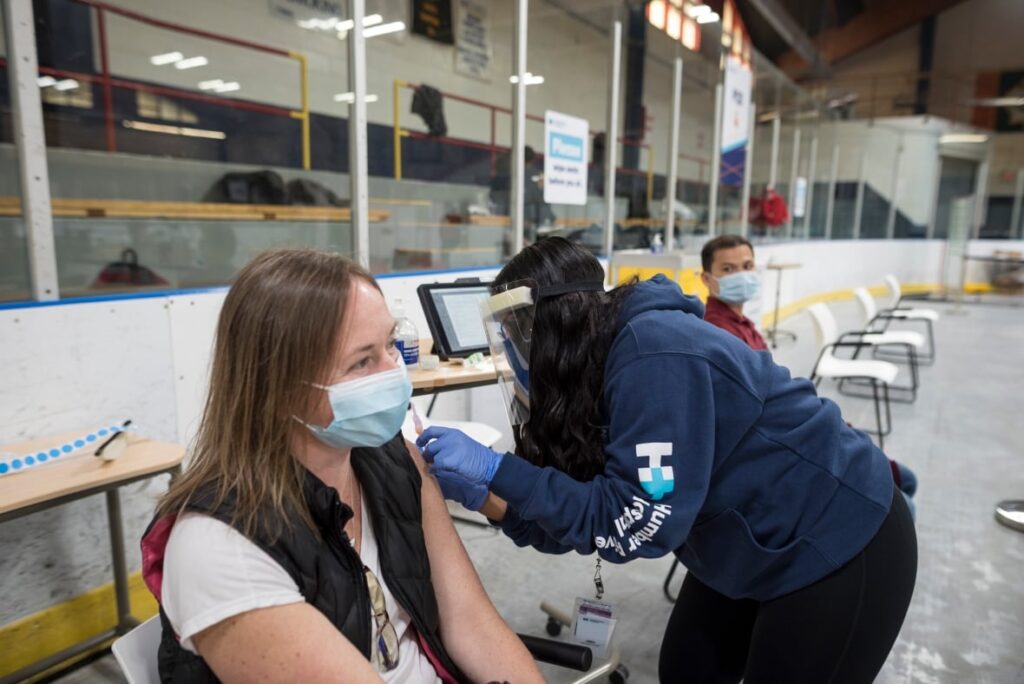 Nursing has been Hannah DeVries’s dream profession, she says, since birth. It’s also a family calling: her two sisters are registered nurses working in intensive care units, while her mom is an RN for stroke patients.

“I’ve known since forever that this is what I wanted to do,” explained the college student, who kicked off her first year at Seneca’s campus in King City, Ont., this September.

“[The pandemic] just gave me a desire to get into it as fast as I can. To come and help out the people, the nurses, because they’re struggling.”

Before COVID-19, there was already a serious shortage of nurses across Canada. Perennially, there’s also been stiff competition for acceptance into post-secondary nursing programs. However, the pandemic has underlined the need to ramp up the number of nurses in training — often in creative and new ways — in order to help tackle critical demand in the workforce.

DeVries is aware just how many others are equally keen about her dream job. “It was extremely difficult to get in: you have to have top grades … The competition was really tough,” she noted.

“Everyone had better grades because it was online … [which] made universities and colleges’ acceptance rate harder as well,” he said.

As a mature student with a 3.74 GPA after more than a year studying nursing at the University of British Columbia’s Okanagan campus, Melissa Philp had hoped to transfer into the University of Calgary’s condensed bachelor of nursing program following her family’s recent move to Alberta.

“It was quite heartbreaking when I didn’t get in.”

Philp thinks a significant increase in the grade-point average of incoming students is the main reason her application was waitlisted, then rejected.

“It’s a whole other year that I need to go do more upgrading to get my marks higher … To get my GPA up essentially from an A- to an A+,” she said.

Nursing has long been a popular area of study, said Nora MacLachlan, dean of health and community studies at Calgary’s Bow Valley College. Motivated applicants to the school’s practical nursing diploma program, for instance, sometimes waited close to a year — if not longer — to get in even before the pandemic, she said.

The solution isn’t as easy as just accepting more students, especially since COVID-19 has made a serious dent in one vital part of nursing education: practicum placements in hospitals and other health-care settings.

“A lot of what we’re working through right now is the existing group of learners … so that we can make room for more,” MacLachlan explained.

With nurses already pushed to exhaustion in the field during the pandemic, she said, “we’re receiving not quite as many practicum placements as we have in the past, but we’re working on being a bit creative around that.”

Along with forging new partnerships to allow students to build their hands-on experience, Bow Valley is pushing forward on other fronts, including piloting VR simulation for some clinical training.

MacLachlan is also working to improve and boost enrolment in other Bow Valley training programs, including preparing international nurses for the Canadian setting and another that takes prior education and work experience of health-care aides into account for fast-tracked study in practical nursing.

Meanwhile in Fredericton, University of New Brunswick nursing dean Lorna Butler is working to widen the pathway into the school’s registered nursing program.

She’s building on previous experience gained at the University of Saskatchewan, where she developed a remote learning initiative using robotics technology to teach nursing students in the province’s north.

In 2020, UNB announced a new program for licensed practical nurses to obtain bachelor of nursing degrees. After  hearing from a flood of interested applicants, the team dug into where they were located and cross-referenced that with data about which regions most need nurses. They then identified Miramichi as an ideal launchpad.

The pandemic has forced pivots to virtual learning, but it’s also quickly demonstrated that online classes can reach students who are farther afield, Butler said.

Starting in September 2022, this new “learn where you live” initiative will see students virtually log into classes being taught from the university’s Fredericton campus. Hands-on training labs and exams, however, will take place locally at Miramichi colleges with existing practical nursing diploma programs. Clinical placements will also be hosted within the community.

The hope is to reach more of those “who would not have come into the degree program normally, because of the access and the cost associated with leaving home, their jobs and relocating to campus,” Butler said.

There are different factors affecting how to boost the number of nursing students, according to Butler, who decries a focus just on undergraduate admissions.

“Our job is not to see how much, how fast, but to see what’s the capacity in the province to provide what that region of the province needs now … the right person in the right place,” she explained.

“What we don’t want to do is compromise the quality of the people we’re putting into the health-care region.”

In Ontario, the provincial government is taking the opposite approach in its attempt to boost nursing school capacity. In February 2020, Ontario announced that colleges, which had partnered with universities to offer four-year bachelor of science nursing degrees, would be permitted to offer standalone baccalaureate programs.

This fall, a number of schools that previously offered such degrees jointly with another institution announced September 2022 start dates for their respective new independent nursing degrees, including Loyalist College, York University and Seneca College.

It’s vital the government continues to offer this support “with regard to funding to expand nursing [education] spaces,” said Maria May, Seneca College’s dean of applied arts and health sciences.

‘A feast of opportunities’

Seeing a wave of enthusiastic aspiring nurses is a silver lining to the dark cloud of a profession stretched to the limit amid COVID-19, said Doris Grinspun, CEO of the Registered Nurses’ Association of Ontario.

It is the best of times — “because any new nursing graduate will have a spot,” Grinspun said — and the worst, noting that Canada lacks thousands of qualified nurses.

She thinks provincial governments and faculties of nursing must creatively reimagine education for a nurse’s entire career path.

This could start with funding more nursing seats in entry-level training, she said. Practicum placements could be more regularly broadened beyond hospitals to non-traditional venues — like correctional facilities, substance abuse clinics or long-term care homes, Grinspun suggested — where students can experience a wide range of meaningful learning.

Placement hours should also be extended to evenings, nights and weekends, she added, since “that’s the reality of nursing.”

“It’s a feast of opportunities. All we need is excellent work environments, governments that support nursing in action — not just saying ‘heroes’ — and the public will have and will continue to have the best out of our profession.”