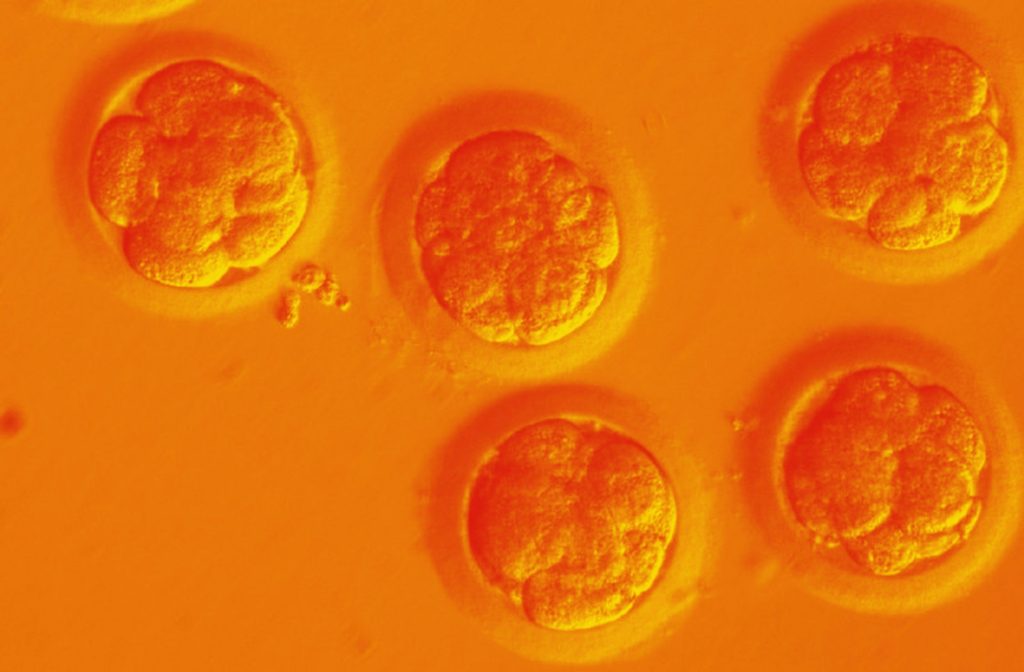 When Chinese researchers first edited the genes of a human embryo in a lab dish in 2015, it sparked global outcry and pleas from scientists not to make a baby using the technology, at least for the present.

It was the invention of a powerful gene-editing tool, CRISPR, which is cheap and easy to deploy, that made the birth of humans genetically modified in an in vitro fertilization (IVF) center a theoretical possibility.

Now, it appears it may already be happening.

According to Chinese medical documents posted online this month (here and here), a team at the Southern University of Science and Technology, in Shenzhen, has been recruiting couples in an effort to create the first gene-edited babies. They planned to eliminate a gene called CCR5 in hopes of rendering the offspring resistant to HIV, smallpox, and cholera.

The clinical trial documents describe a study in which CRISPR is employed to modify human embryos before they are transferred into women’s uteruses.

The scientist behind the effort, He Jiankui, did not reply to a list of questions about whether the undertaking had produced a live birth. Reached by telephone, he declined to comment.

However, data submitted as part of the trial listing shows that genetic tests have been carried out on fetuses as late as 24 weeks, or six months. It’s not known if those pregnancies were terminated, carried to term, or are ongoing.

[After this story was published, the Associated Press reported that according to He, one couple in the trial gave birth to twin girls this month, though the agency wasn’t able to confirm his claim independently. He also released a promotional video about his project.]

The birth of the first genetically tailored humans would be a stunning medical achievement, for both He and China. But it will prove controversial, too. Where some see a new form of medicine that eliminates genetic disease, others see a slippery slope to enhancements, designer babies, and a new form of eugenics.

The step toward genetically tailored humans was undertaken in secrecy and with the clear ambition of a stunning medical first.

“In this ever more competitive global pursuit of applications for gene editing, we hope to be a stand-out,” He and his team wrote in an ethics statement they submitted last year. They predicted their innovation “will surpass” the invention of in vitro fertilization, whose developer was awarded a Nobel Prize in 2010.

The claim that China has already made genetically altered humans comes just as the world’s leading experts are jetting into Hong Kong for the Second International Summit on Human Genome Editing.

The purpose of the international meeting is to help determine whether humans should begin to genetically modify themselves, and if so, how. That purpose now appears to have been preempted by the actions of He, an elite biologist recruited back to China from the US as part of its “Thousand Talents Plan.”

The technology is ethically charged because changes to an embryo would be inherited by future generations and could eventually affect the entire gene pool. “We have never done anything that will change the genes of the human race, and we have never done anything that will have effects that will go on through the generations,” David Baltimore, a biologist and former president of the California Institute of Technology, who chairs the international summit proceedings, said in a pre-recorded message ahead of the event, which begins Tuesday, November 27.

It appears the organizers of the summit were also kept in the dark about He’s plans.

The genetic editing of a speck-size human embryo carries significant risks, including the risks of introducing unwanted mutations or yielding a baby whose body is composed of some edited and some unedited cells. Data on the Chinese trial site indicate that one of the fetuses is a “mosaic” of cells that had been edited in different ways.

A gene-editing scientist, Fyodor Urnov, associate director of the Altius Institute for Biomedical Sciences, a nonprofit in Seattle, reviewed the Chinese documents and said that, while incomplete, they do show that “this effort aims to produce a human” with altered genes.

Urnov called the undertaking cause for “regret and concern over the fact that gene editing—a powerful and useful technique—was put to use in a setting where it was unnecessary.” Indeed, studies are already under way to edit the same gene in the bodies of adults with HIV. “It is a hard-to-explain foray into human germ-line genetic engineering that may overshadow in the mind of the public a decade of progress in gene editing of adults and children to treat existing disease,” he says.

In a scientific presentation in 2017 at Cold Spring Harbor Laboratory, which is posted to YouTube, He described a very large series of preliminary experiments on mice, monkeys, and more than 300 human embryos. One risk of CRISPR is that it can introduce accidental or “off target” mutations. But He claimed he found few or no unwanted changes in the test embryos.

He is also the chairman and founder of a DNA sequencing company called Direct Genomics. A new breed of biotech companies could ultimately reap a windfall should the new methods of conferring health benefits on children be widely employed.

According to the clinical trial plan, genetic measurements would be carried out on embryos and would continue during pregnancy to check on the status of the fetuses. During his 2017 presentation, He acknowledged that if the first CRISPR baby were unhealthy, it could prove a disaster.

“We should do this slow and cautious, since a single case of failure could kill the whole field,” he said.

A listing describing the study was posted in November, but other trial documents are dated as early as March of 2017. That was only a month after the National Academy of Sciences in the US gave guarded support for gene-edited babies, although only if they could be created safely and under strict oversight.

Currently, using a genetically engineered embryo to establish a pregnancy would be illegal in much of Europe and prohibited in the United States. It is also prohibited in China under a 2003 ministerial guidance to IVF clinics. It is not clear if He got special permission or disregarded the guidance, which may not have the force of law.

Researchers have demonstrated they can efficiently improve the DNA of human embryos.

In recent weeks, He has begun an active outreach campaign, speaking to ethics advisors, commissioning an opinion poll in China, and hiring an American public-relations professional, Ryan Ferrell.

“My sense is that the groundwork for future self-justification is getting laid,” says Benjamin Hurlbut, a bioethicist from Arizona State University who will attend the Hong Kong summit.

The new opinion poll, which was carried out by Sun Yat-Sen University, found wide support for gene editing among the sampled 4,700 Chinese, including a group of respondents who were HIV positive. More than 60% favored legalizing edited children if the objective was to treat or prevent disease. (Polls by the Pew Research Center have found similar levels support in the US for gene editing.)

He’s choice to edit the gene called CCR5 could prove controversial as well. People without working copies of the gene are believed to be immune or highly resistant to infection by HIV. In order to mimic the same result in embryos, however, He’s team has been using CRISPR to mutate otherwise normal embryos to damage the CCR5 gene.

The attempt to create children protected from HIV also falls into an ethical gray zone between treatment and enhancement. That is because the procedure does not appear to cure any disease or disorder in the embryo, but instead attempts to create a health advantage, much as a vaccine protects against chicken pox.

For the HIV study, doctors and AIDS groups recruited Chinese couples in which the man was HIV positive. The infection has been a growing problem in China.

So far, experts have mostly agreed that gene editing shouldn’t be used to make “designer babies” whose physical looks or personality has been changed.

He appeared to anticipate the concerns his study could provoke. “I support gene editing for the treatment and prevention of disease,” He posted in November to the social media site WeChat, “but not for enhancement or improving I.Q., which is not beneficial to society.”

Can we safely fix the DNA of human embryos in a lab dish?

Still, removing the CCR5 gene to create HIV resistance may not present a particularly strong reason to alter a baby’s heredity. There are easier, less expensive ways to prevent HIV infection. Also, editing embryos during an IVF procedure would be costly, high-tech, and likely to remain inaccessible in many poor regions of the world where HIV is rampant.

A person who knows He said his scientific ambitions appear to be in line with prevailing social attitudes in China, including the idea that the larger communal good transcends individual ethics and even international guidelines.

Behind the Chinese trial also lies some bold thinking about how evolution can be shaped by science. While the natural mutation that disables CCR5 is relatively common in parts of Northern Europe, it is not found in China. The distribution of the genetic trait around the world—in some populations but not in others—highlights how genetic engineering might be used to pick the most useful inventions discovered by evolution over the eons in different locations and bring them together in tomorrow’s children.

Such thinking could, in the future, yield people who have only the luckiest genes and never suffer Alzheimer’s, heart disease, or certain infections.

The text of an academic website that He maintains shows that he sees the technology in the same historic, and transformative, terms. “For billions of years, life progressed according to Darwin’s theory of evolution,” it states. More recently, industrialization has changed the environment in radical ways posing a “great challenge” that humanity can meet with “powerful tools to control evolution.”

It concludes: “By correcting the disease genes … we human[s] can better live in the fast-changing environment.”

Note: This story was updated after publication to include claims by He Jiankui that the trial had produced live births.